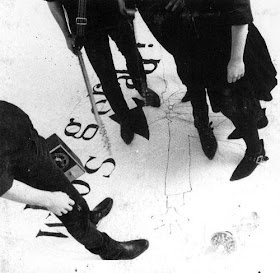 Who's Gerald? was a bad band in a time of very bad music.
The people in the band, although fine people now,
were all idiots at the time. I was the biggest idiot of them all.
All the songs, without exception, were atrocious.
There are no good memories of that time.
Except when we broke up.
Dave McCormack

David McCormack's first band the wonderfully named Who's Gerald.
Legend has it they were named after the response to finding a
wooden coat hanger with Gerald written on it,
Actually they were named after Gerald V. Casale from Devo.
Dave went on to become one of Brisbane's leading musical lights,
leading several bands, Custard being the most successful,
the Titanics and the Polaroids.
At the Pig City Festival Dave put on a ripper performance
playing songs from throughout his career.

Who's Gerald released a single named
"Wrestle Wrestle/Gerald Is Stumbling Away Upon The Highway Of
Life"and had a track called "Pins And Needles"
included on the 1988 Youngblood compilation.

Track List
01 Pins and Needles
02 Gerald is Stumbling along the Highway of Life
03 Wrestle, Wrestle

I know it is frightening to think this way my friends, but it was
actually 20 years ago this year that me and Paul Medew and
Glen Donald started our first band together called Whos
Gerald. Us three met at school in Ipswich, a stinking hot
mining town about 125 years west of Brisbane.
After high school, Paul went off to Townsville to attend James
Cook University. Glen and I headed off to Queensland
University. There we met Cathy Atthow. Shed never played
drums before, but I think her brother had a drum kit,
so she was our drummer. If Id known about the Velvet
Underground back then, I would havethought we were really
cool. At the time I thought we were cool cuz the Gobetweens
had a girl on drums, and so do we.We put up adverts all
around Uni for a bass player and got one
response. It was a journalism student called Christian Dahl.
Christian was a bit older than us, drunk spirits and had a song
called Ive got the no coffee, caffeine deficiency blues which we
used to play at parties. Looking back now, Christian was to my
life sort of a Matthew Strong Beta version. More on that later.
Wed rehearse at Christians house in Indooroopilly. Sometimes
wed rehearse out at Queensland University, under the Activities
office. They had a small Roland PA that we could hire.
One night, the PA was doubled booked, and we used to get so
excited about practice that we just had to play. So we drove
around the Uni grounds and stumbled upon some sort of hockey
training club house thing. There was a power outlet on the wall.
We plugged in and played. Wed always travel in a convoy of 3
or four cars and have everything we needed to play right there
with us. There would be a couple of guitar amps, normally with
multiple inputs so we could run mikes and stuff through there as
well, a bass amp, a drum kit, obviously instruments and what
have you, a couple of mike stands and a few shitty old mikes.
Afterwards, we go to Hungry Jacks at Taringa, where Cathy
worked,and shed get us free food. They used to have a burger
called a Yumbo. It was a microwaved ham and cheese thing.
I loved em. Our first real gig was at a place called The Outpost
in the Valley. It is where the Red Garter strip bar is now.
Or is it called Bad Girls now? Not sure.
Our second gig was at The Love Inn, just up the road
a bit. Our third was back at the Outpost. Things continued on like
this for a while. We recorded one 7inch single called
Wrestle/Wrestle. A label from Sydney called rooArt called us up
and asked us to contribute a track to their Youngblood
compilation. We went to QTQ Channel 9s studios up at Mt Cootha
and recorded Pins & Needles. We played 4ZZZ Market Day once or
twice. We never toured interstate.
Our two biggest gigs were support Sonic Youth at The Patch at
Tweed Heads and INXS at Brisbane Entertainment Centre.
Around 1989 somewhere we split up.
It seems so long ago, and yet just like yesterday. 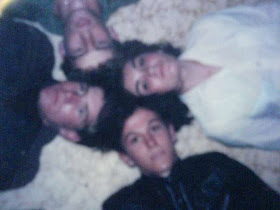