The Mercurials - Silver and Gold 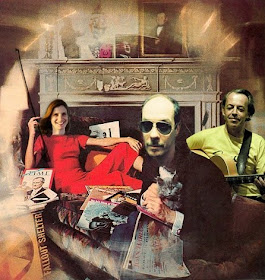 Just in time for Christmas I received a wonderful email
from Australia's greatest bass player Mark Ferrie.
Mark who has played for bands such as diverse as the
Models, the sacred cowboys and most recently the Rockwiz
house band, has had this wonderful project going
with his old mate Andrew Pendlebury who happens
to be Australia's greatest guitarist. They have been going for a
number of years now and have just released their 3rd album.
By the way they both were in the legendary Melbourne band
The Slaughtermen. This time they are both on guitar.
The Album "Silver And Gold" of which they sent me a copy,
is superb, the third member of the group Adi Sappir is a cellist
and vocalist and like their secret weapon she makes this into
something very special.
They describe their music as a sauna for the soul, and
that's a pretty good way to put it. There's so many great songs
on here, I particularly like the cover of the sports tune
"How come", Andrew played in the Sports in case you
didn't know and this is a fab version, gone is the pop song
replaced with a beautiful haunting ballad.
But don't believe me get over to their Myspace site to
have a listen. Find it here
They also have a web site with everything you could
want, music samples, photos, bios and links to
get hold of the music
Find it here

I'm heading off with the family to camp in the Lamington
wilderness for 5 days or so, this album will be on high
rotation at my camp site! 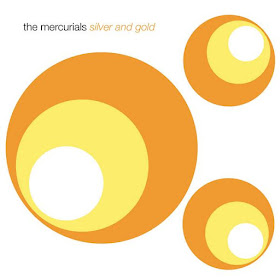 Now here's a bio for everything I missed

The MERCURIALS are a musical trio hailing from
Melbourne, Australia that has been performing since
the start of the 2004.They draw on a number of musical
bases (including blues, folk, rock and classical)
to produce a sound that is a unique
product of the Melbourne musical environment.
The group has been described as a ‘hip chamber group
playing contemporary adult music’.
The group is composed of ARIA award winning guitarist
ANDREW PENDLEBURY,
guitarist/vocalist/songwriter MARK FERRIE
and ADI SAPPIR, an adventurous, young cellist
and vocalist.Each member brings with them a diverse
range of experience and influences to create the
Mercurials sound. Their live repertoire includes original
material in addition to interpretations of tunes by artists
as diverse as Bob Dylan, Irving Berlin, Jimi Hendrix,
Kraftwerk and Neil Young. A feature of the group is the
wondrous vocals of Adi Sappir, who sings in both English
and her native Hebrew.The group came together in late
December of 2003 to perform at the Ian Potter Gallery in
the National Gallery of Victoria at Federation Square and
have since made several appearances on the Derek Guille
Evening program on ABC radio, in addition to the popular
‘Off The Record’ and ‘JVG Radio Method’ programs on 3RRR.
They have also won over audiences at the 2004 Adelaide
Fringe Festival, the Boite World Music Café in North Fitzroy,
the 2006 Port Fairy Folk Festival, the 2006 Mt Beauty Music
Muster and a host of music venues and festivals around
Melbourne and rural Victoria.
The MERCURIALS released their debut self titled CD in June
2005 and launched it to a sell-out audience at Dizzy’s night
club in Richmond in early July.
The combination of Mark and Andrew, who have played
together in various combinations on the Melbourne live
music scene since the mid 70s, and the exotic new dimension
which Adi brings to the mix, has resulted in a unique, magical,
world class musical ensemble with a truly refreshing new sound. 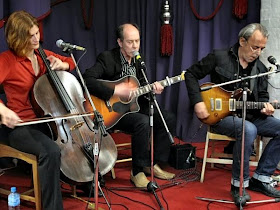